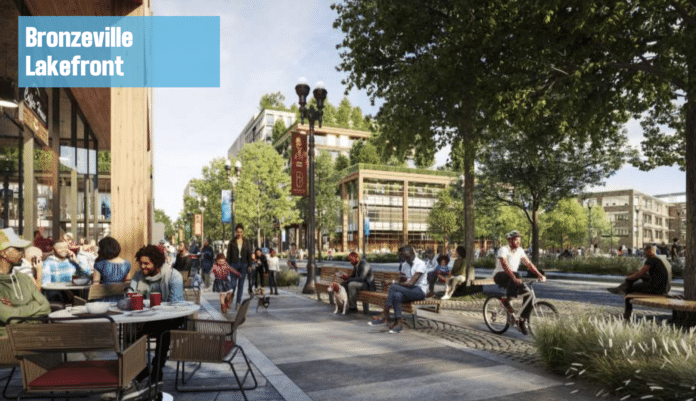 Chicago City Council has approved Bronzeville Lakefront, the city’s first megadevelopment to be built by GRIT Chicago, a team that is 50 percent minority and includes a local community organization. The project has an estimated $3.8 billion value and is expected to break ground in the fall.

The 48-acre site is the former location of the Michael Reese Hospital and Medical Center, which closed in 2008. The City of Chicago acquired the property in 2009 and cleared most of the land in ensuing months.

GRIT aims to create enduring economic transformation on Chicago’s South Side, the organization says in a statement. “From its community-driven, sustainable design and construction program to a pioneering life sciences innovation center, the community is designed to spur massive economic development through substantial temporary and permanent job creation and the significant generation of income through business creation, commerce and industry.”

The first phase of the Bronzeville Lakefront project is an approximately70-acre planned development including what the developers say is “a life sciences innovation center designed to stimulate global collaboration and significant business creation”; open space that includes a greater than200,000 sq. ft. park; new multifamily, senior and affordable housing; and commercial and retail spaces.

The infusion of industry, retail and housing the development will bring to the neighborhood is expected to generate $3.5 billion in direct economic impact and create 31,000 full-time positions and 45,000 direct and indirect construction jobs, the statement says. Indirect economic impact will total $4.7 billion, and tax revenues are anticipated to top $1.5 billion over the next 20 years.

“Bronzeville Lakefront is unlike other Chicago megadevelopments in several striking ways.” the statement says. “It will be home to an ethnically and socioeconomically diverse group of residents thanks to its mix of senior, family, workforce and affordable housing.  In contrast to many other large area developments, all of its affordable housing units will be on-site. Finally, GRIT, a diverse development team, expects to meet a goal of 65 percent minority suppliers to build Bronzeville Lakefront.

The health innovation anchor—Chicago ARC Innovation Center—also plays a part in Bronzeville Lakefront’s mission to create social justice. Intended to create health equity  in a city with the nation’s widest racial gap in life expectancy, Chicago ARC is a partnership with Israel-based Sheba Medical Center, which has a world-renowned track record for revolutionizing health care on a global scale. 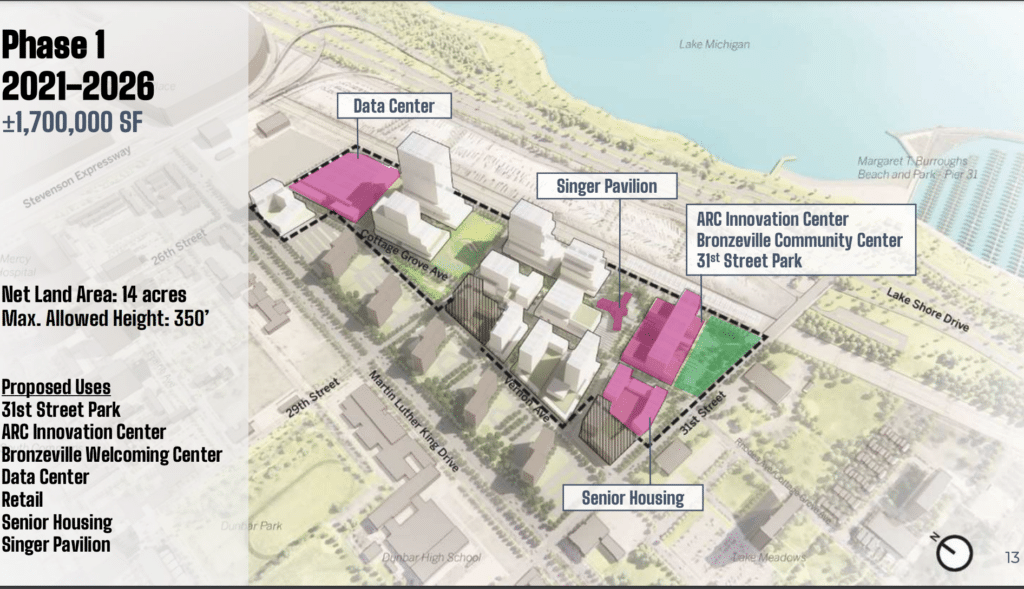 “At a time when high-end megadevelopments built by nondiverse teams are reframing America, Chicago’s Bronzeville Lakefront is designed to change this paradigm,” the GRIT statement says. “It is not only aligned with the values of 4th Ward residents and Chicagoans, but it also accomplishes the goals that Mayor Lightfoot has laid out in her INVEST South/West campaign.”

“Most significantly, it brings Bronzeville residents the development they want for their community. Ald. Sophia D. King has been working closely with GRIT for the past four years to develop a project that embodies the values of the Bronzeville community. The process involved a robust and innovative public engagement process to create a development the community can be proud of and reflects its values.”

“I am in full support of this transformative project, which is sure to set the standard for how to properly engage communities,” King said in the statement. It will also be transformative in a very real sense by adding to the strength and vitality of the Bronzeville community. I look forward to continuing to work with GRIT and the community in an ongoing process to make Bronzeville Lakefront a success.”

The GRIT team says it is eager to move ahead with its city and community partners “because they know Bronzeville Lakefront is going to be an economic engine for not only the neighborhood, but also for the entire South Side.

“It will create strong, quality careers for hard-working Chicagoans in Bronzeville and beyond thanks to the Chicago ARC Innovation Center.  A project like this—during tough economic times—is more important than ever and GRIT is excited to break ground late fall now that it has gained City Council approval.”