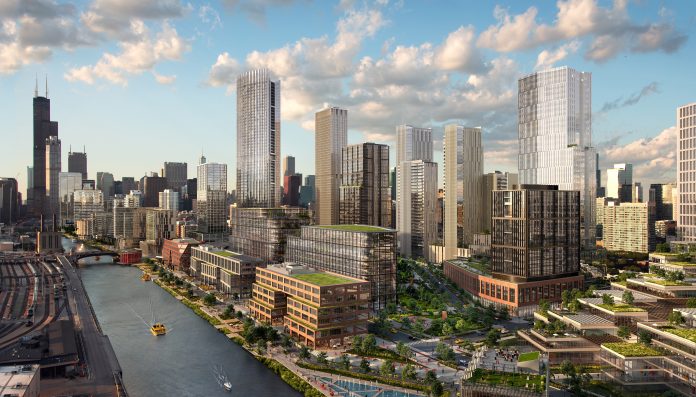 A Community Advisory Council (CAC) has been formed to serve as a conduit for community input as the $7 billion “The 78” development project on the Near South Side moves forward.

Working with the developer and the local aldermen, the city is soliciting applications from community members to serve on the CAC, Mayor Lori Lightfoot says in a statement. An application for CAC volunteers is available at www.chicago.gov/78.

“When I first entered office, I made a commitment to ensure that all major planning efforts, including large-scale development projects like The 78, will be met with robust and inclusive community engagement processes,” Lightfoot said. “The 78 Community Advisory Council will provide a transparent process for residents and other stakeholders to provide guidance, identify improvements, and maximize economic opportunities for the community and the city at large as design and construction gets underway.”

The 17-member CAC will consist of neighborhood representatives, community leaders, design professionals, and subject-matter experts appointed by Lightfoot and Ald. Byron Sigcho-Lopez in consultation with neighboring aldermen and local stakeholders. The group will meet quarterly starting in early 2020, making recommendations ranging from public infrastructure design to traffic control and open space, among other issues.

The CAC’s recommendations will be made to Related Midwest and the Mayor’s Office on an advisory basis and implemented where possible throughout the duration of The 78’s anticipated 20-year construction timeline. A special charter for the CAC will provide a framework for the group’s membership and meeting protocols.

“We understand the importance of community participation throughout the development process, which is why the Community Advisory Council presents an exciting opportunity to further our community dialogue,” Related Midwest president Curt Bailey said. “We look forward to a deeper engagement with stakeholders that identifies the best uses of our approved planned development to meet community needs as we create Chicago’s next great neighborhood together.”

Encompassing 62 acres of vacant land along the South Branch of the Chicago River, The 78 is planned to include approximately 13 million sq. ft.  of new commercial, residential and institutional construction. The project is anticipated to generate 39,000 permanent and temporary jobs, 12 acres of open space, multiple infrastructure improvements including a new Red Line subway station at 15th Street, and a 20 percent affordable housing commitment.

The Dec, 19 announcement builds on a number of milestones highlighting recent progress at The 78, including:

The city will simultaneously monitor The 78 for compliance with a comprehensive redevelopment agreement approved by City Council earlier this year that includes terms for minority- and women-owned business participation, affordable housing, and City financial assistance for public infrastructure improvements, among other provisions.

Since taking office, Mayor Lightfoot’s administration says it has taken steps to ensure all major development projects like The 78 and Lincoln Yards will be met with robust and inclusive community engagement processes.

Earlier this year, the Lightfoot administration put forward new public engagement guidelines for large development projects. These guidelines, which are currently under consideration by the Chicago Plan Commission, would require new public engagement protocols for “Master Planned Development” projects that move forward on large development sites like the former Michael Reese hospital in Bronzeville, General Iron in Lincoln Park, and USX in South Chicago. The guidelines are expected to be adopted by Plan Commission in early 2020.

GRIT to buy former Michael Reese Site for $96.9 million for...