There’s a show within the show at the Chicago Architecture Biennial that turns the event’s international flavor to matters much closer to home. BOLD: Alternative Scenarios for Chicago includes what Wired Magazine calls “a collection of radical, Chicago-centric proposals from more than a dozen local offices.”

Wired says Iker Gil, director of MAS Studio, organized the show-within-a-show. “Like most speculative work, the plans require some willing suspension of disbelief in terms of their scope and implementation,” the technology magazine reports. “But most contain smart suggestions for a metropolis whose basic infrastructures have been in place for well over a century.”

“They are looking at the future, but they are still very grounded in the realities of the city,” said Gil. “We want to make people think about how new ideas like these could be implemented.”

The variety of designers—from emerging to world-famous—and approaches—from region-altering master plans to offbeat architectural innovations—gives the series what Gil calls a “comprehensive view” of the city, and “the role of architects at all scales.”

“They don’t just do houses,” he told Wired.

Some proposals suggest grand urban transformations. “UrbanLab’s Filter Island imagines bioswales, wetlands, and other natural filters for the Chicago River’s pollutants as elements in a vast and colorful public park. Port Urbanism’s The Big Shift proposes moving Lake Shore Drive—currently a barrier past which development is prohibited—eastward, and, through landfill and road tunneling, clearing the way for a new skyline and 150-acre public waterfront.”

“The fact of the matter is Chicago’s really big urban moves are in the past,” Port Urbanism‘s Christopher Marcinkoski is quoted as saying “To not look forward to how the city might transform in the next century is a missed opportunity.”

There’s a free Tuesday talk relating to these matters. You can obtain more information and register at this link. 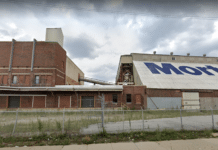