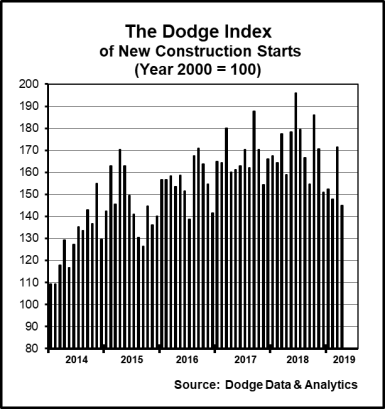 The value of new construction starts in April fell 15% to a seasonally adjusted annual rate of $685.2 billion, pulling back following the 16% hike that was reported in March, according to Dodge Data & Analytics.

Steep declines were registered by two of the three main construction sectors. Nonbuilding construction, which is comprised of public works and electric utilities/gas plants, plunged 31% from its elevated March amount which was lifted by the start of the $4.3 billion Calcasieu Pass liquefied natural gas (LNG) export terminal in Cameron LA. Nonresidential building fell 18% in April after being boosted in March by groundbreaking for the $1.6 billion Toyota-Mazda automotive manufacturing facility in Huntsville AL, among other large projects.

During the first four months of 2019, total construction starts on an unadjusted basis were $224.5 billion, down 8% from the same period of 2018. On a twelve-month moving total basis, total construction starts for the twelve months ending April 2019 held steady with the corresponding amount for the twelve months ending April 2018.

“The construction start statistics can be volatile on a month-to-month basis, and that’s certainly been true in March and April, as a 16% jump was followed by a 15% decline,” Robert A. Murray, chief economist for Dodge Data & Analytics, said in a statement. “Much of the volatility can be attributed to the presence or absence of large projects – in March there were ten projects valued each at $500 million or more that reached groundbreaking, while April saw only two such projects.

“The public works side of nonbuilding construction got off to a slow start in 2019, which at least through March was partially offset by an upturn for electric utilities/gas plants. Some improvement for public works is expected as the current year proceeds, given the fiscal 2019 federal funding approved back in February as well as the continued support of state construction bond measures. Nonresidential building is staying close to its pace of last year, helped by continued strength for office buildings, hotels, educational facilities, and transportation terminals. The multifamily side of residential building is retreating, even with the occasional monthly upturn, while single family housing has not yet provided evidence that it can rebound from the slower pace that took hold towards the end of last year.” 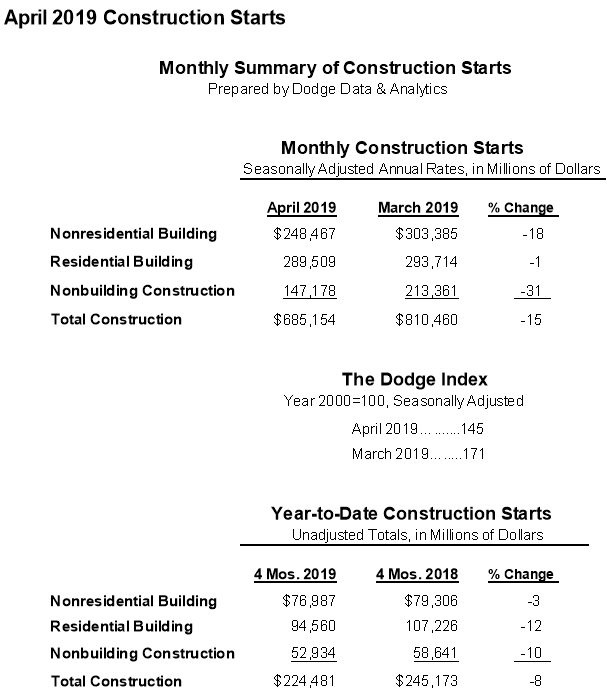 Nonbuilding construction in April plunged 31% to $147.2 billion (annual rate), which followed a 40% surge in March. The $4.3 billion LNG export terminal in Louisiana that was included as a March start caused much of this volatility – if this project is excluded, the decline for nonbuilding construction in April would have been a more moderate 9% following a 7% increase in March. The electric utility/gas plant category plummeted 87% in April, reflecting both weak activity for the month and the comparison to March that included the $4.3 billion LNG export terminal.

The public works categories as a group dropped 5% in April, slowing after a 21% increase in March. The miscellaneous public works category (which includes site work, rail transit, and pipelines) fell 29%, although April did include the start of a $307 million rail transit extension at Hartsfield-Jackson International Airport in Atlanta GA and a $290 million riverfront revitalization project in Omaha NE. Declines were also reported in April for water supply construction, down 17%; and river/harbor development, down 40%. On the plus side for public works, sewer construction in April climbed 88%, led by a $631 million water pollution control effluent tunnel in Carson CA and a $412 million sewer project in Redwood City CA. Highway and bridge construction in April edged up 1%, rising for the second month a row after declines in January and February.

Supporting April’s improved highway and bridge amount was $253 million for the start of renovation work on the Throgs Neck Bridge in the Bronx NY. The top five states for highway and bridge construction starts in April, ranked by dollar volume, were – California, Texas, Florida, New York, and Ohio.

The amusement-related category fell 50% after being boosted in March by the $850 million renovation of the KeyArena in Seattle WA. Healthcare facilities fell 29% in April following growth during the previous two months, while the public buildings category (courthouses and detention facilities) dropped 22%. On the plus side, the transportation terminal category soared 159% in April, lifted by the $972 million terminal building portion of the $1.3 billion new airport terminal project at Kansas City International Airport. Educational facilities grew 6% in April, registering improvement for the second month in a row after a lackluster performance in January and February. Large high school projects that reached groundbreaking in April were located in Fall River MA ($215 million), Upper Arlington OH ($140 million), and Santa Monica CA ($98 million). The top five states for K-12 school construction starts in April, ranked by dollar volume, were – Texas, Ohio, California, Washington, and Massachusetts.

The commercial building categories as a group fell 16% in April, after a 22% rise in March. Hotel construction dropped 51% from its March amount, which featured the start of the $850 million hotel portion of a $1.1 billion hotel and theater redevelopment project located in Times Square New York City. The largest hotel project that reached groundbreaking in April was a $229 million Embassy Suites hotel in Nashville TN. Office construction in April retreated 9% from its March amount, which included such projects as a $750 million Facebook data center in Sandston VA, the $550 million Norfolk Southern headquarters building in Atlanta GA, and a $300 million CloudHQ data center in Ashburn VA. In April, new data center projects continued at a brisk pace, with six projects valued each at $100 million or more reaching groundbreaking, led by a $315 million Facebook data center in New Albany OH.

Other noteworthy office projects in April were a $300 million upgrade to the One Post Office Square Tower in Boston MA, a $170 million office building in Chicago IL, and two Charles Schwab office buildings in Westlake TX valued at $84 million and $81 million respectively. The top five metropolitan areas for office construction starts in April, ranked by dollar volume, were – Dallas-Ft. Worth TX, New York NY, Boston MA, Columbus OH, and Portland OR. Store construction weakened in April, sliding 25%, while warehouse construction dropped 12%. The commercial garage category was the one commercial project type that posted an April gain, rising 33% with the boost coming from the $288 million garage portion of the new airport terminal project at Kansas City International Airport.

Residential building in April slipped 1% to $289.5 billion (annual rate), receding for the third month in a row. Single family housing dropped 4%, and April’s level of activity was down 9% from the average monthly pace during 2018. By geography, single family housing in April showed this pattern relative to March – the South Atlantic, down 8%; the Northeast, down 6%; the South Central, down 5%; the West, down 1%; and the Midwest, up 8%. Multifamily housing in April advanced 5% after a 9% decline in March, but April’s level of activity was still down 18% from the average monthly pace during 2018. There were ten multifamily projects valued at $100 million or more that reached groundbreaking in April, led by the $220 million multifamily portion of a $300 million mixed-use development on Wilshire Boulevard in Los Angeles CA and a $200 million apartment building in the Bronx NY. The top five metropolitan areas ranked by the dollar amount of multifamily starts in April were – New York NY, Los Angeles CA, Miami FL, Chicago IL, and Austin TX.

The 8% downturn for total construction starts on an unadjusted basis during the January-April period of 2019 was the result of lower activity for each of the three main construction sectors. Nonresidential building decreased 3% year-to-date, with respective declines of 4% and 37% for institutional building and manufacturing building, while commercial building was able to post a 5% gain. Nonbuilding construction dropped 10% year-to-date, as a 21% retreat for public works was partially offset by a 94% jump for electric utilities/gas plants. Residential building fell 12% year-to-date, with single family housing down 8% and multifamily housing down 20%. By major region, total construction starts for the first four months of 2019 revealed this pattern compared to last year – the Midwest, down 17%; the South Atlantic, down 11%; the West, down 9%; the Northeast, down 7%; and the South Central, up 1%

Useful perspective comes from looking at twelve-month moving totals, in this case the twelve months ending April 2019 versus the twelve months ending April 2018. On this basis, total construction starts essentially maintained the same volume as the previous period. By major sector, nonresidential building rose 4%, with commercial building up 9%, manufacturing building up 7%, and institutional building unchanged. Residential building held steady with the previous period, with single family housing unchanged and multifamily housing up 1%. Nonbuilding construction dropped 6%, with electric utilities/gas plants down 1% and public works down 7%. 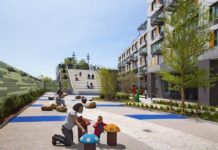 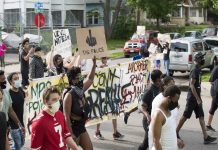 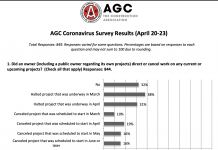