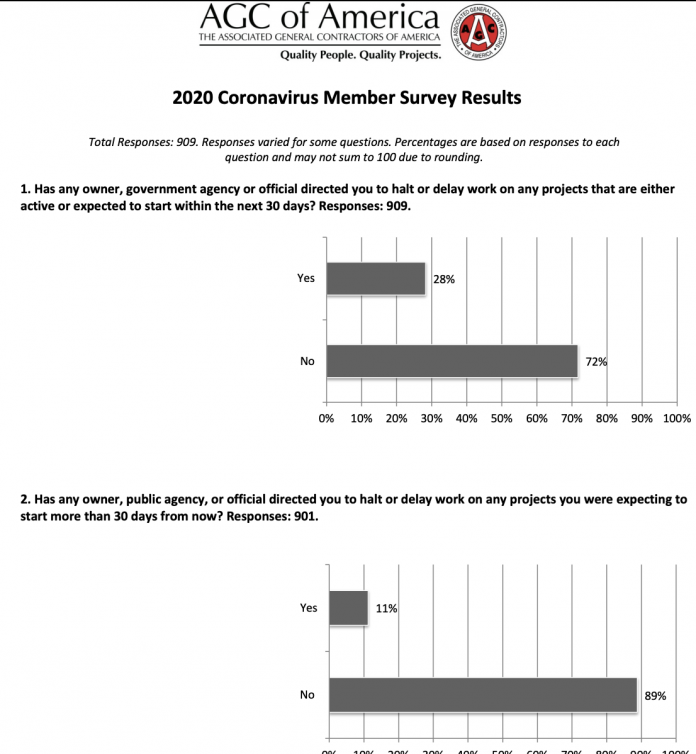 The coronavirus pandemic has caused more than one out of four contractors to halt or delay work on current projects, according to a survey released on March 20 by the Associated General Contractors of America (AGCA). The survey results show how quickly market conditions have changed compared to data showing a majority of metro areas added construction jobs through January. Association officials noted that a relief bill the Senate is considering includes some favorable tax and loan provisions. But they said the bill also needs new infrastructure investments and improvements to the new paid sick and family medical leave measures.

“The coronavirus pandemic has the potential to undermine what had been a very robust construction market, threatening the livelihood of countless workers and the viability of many firms,” said Ken Simonson, the association’s chief economist. “Providing additional tax credits and loans will help, but contractors also need the certainty that comes with infrastructure funding and improvements to the new paid and family leave measures.”

In an online survey conducted by the association between March 17 and 19, 28 percent of the 909 respondents replied yes to the question, “Has any owner, government agency or official directed you to halt or delay work on any projects that are either active or expected to start within the next 30 days?” In addition, 22 percent of respondents said a supplier had notified them that deliveries would be late or cancelled.

Contractors listed numerous types of delays and shortages. Nearly one out of five (18 percent) cited shortages of required government actions or personnel, for instance to issue permits or certificates of occupancy, conduct inspections or lettings, or make project awards. Sixteen percent noted a shortage of materials, parts or equipment, including workers’ personal protective equipment such as respirators. Eleven percent reported a shortage of craft workers as individuals self-quarantine or stay home to care for others.

Association officials said the newly released Senate relief measure does too little to help the increasingly hard-hit construction industry. They noted that the tax and loan provisions in the measure will help offset declining demand. However, they urged Senate leaders to include new funding for infrastructure projects and to protect the retirements and health care of construction workers in multiemployer plans. They also called for additional fixes to measures enacted earlier this week that force employers to front the cost of newly mandated paid family and sick leave measures.

“The Senate proposal offers a good start to helping offset the sudden drop-off in work many contractors are experiencing,” said Stephen E. Sandherr, the association’s chief executive officer. “But without real investments in new infrastructure, compensation for contractors’ lost work and up-front funding for paid sick and family medical leave, it does too little to help the industry and its nearly eight million employees.”