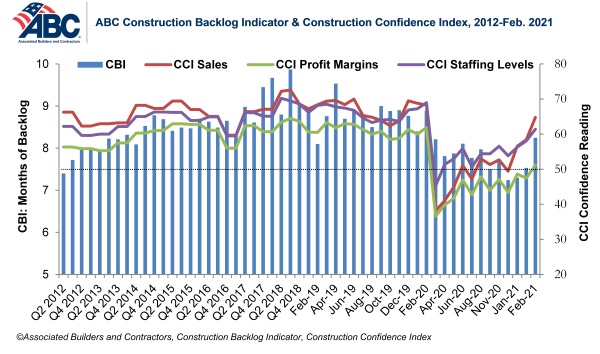 Associated Builders and Contractors (ABC) reported on March 9 that its Construction Backlog Indicator rose to 8.2 months in February, according to an ABC member survey conducted from Feb. 22 to March 3. This is up 0.7 months from January’s reading, but is still 0.7 months lower than in February 2020.

ABC’s Construction Confidence Index readings for sales, profit margins and staffing levels also increased in February. All three indices are now above the threshold of 50, indicating expectations of growth during the next six months, but below February 2020 levels. 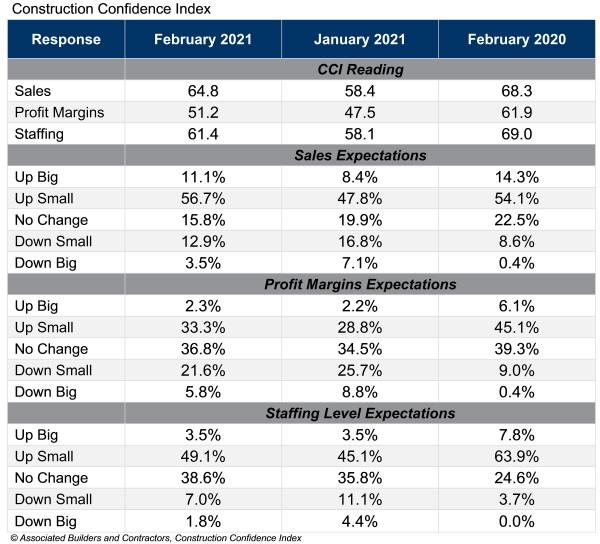 “The expectation that rapid economic recovery could begin later this year has now swept through the nonresidential construction sector, which is surprising, as I anticipated this segment would be less upbeat,” said ABC Chief Economist Anirban Basu. “After all, commercial real estate fundamentals have been compromised by behavioral and policy shifts motivated by the COVID-19 pandemic. Public finances have also been affected negatively, which could diminish demand for construction services going forward. Rapidly rising materials prices are also creating concern, as they would have a tendency to further squeeze industry profit margins. 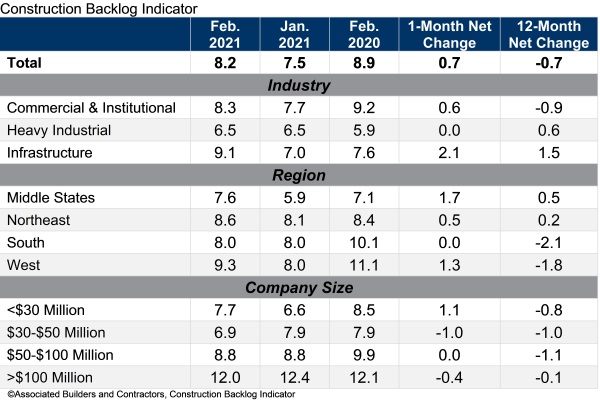 “Despite these factors, contractors now expect sales, staffing levels and profit margins to expand over the next six months,” said Basu. “The way to reconcile downbeat macroeconomic considerations with growing contractor confidence is to analyze backlog. Backlog has been edging higher for several months and rose sharply last month as projects that had been mothballed are coming back to life. Based on survey responses completed in February, projects are reinitiating more rapidly than previously anticipated, driving up both backlog and contractor sentiment. Respondents also appear to view additional federal stimulus as another reason to be optimistic about the near-term.”

Click here for a short video from ABC’s chief economist to see what the latest survey data mean for the construction industry. 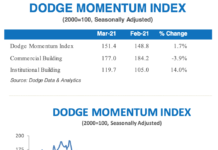 Reception recognizes Dan McLaughlin’s contributions as he prepares to retire